These are the top new dramas on Netflix right now.

Are you looking for the best dramas to stream on Netflix right now? Netflix has no shortage of films that try to hit you right in the feels. From true classics like Taxi Driver and There Will Be Blood to award-winning Netflix Originals like Roma and The Irishman, there’s plenty to choose from on the service. That’s where we come in.

So let’s take a look at the best new releases in Netflix dramas, including many of the top recent films from 2019 and beyond. Our newest additions are marked with an asterisk. And when you’re done here, be sure to also check out our pick for the Best Drama Movie of 2019 or our list of what’s new to Netflix this month.

Or follow these links for the best of other genres:

Please note: This list pertains to U.S. Netflix subscribers. Some titles may not currently be available on international platforms. This article is frequently amended to remove films no longer on Netflix, and to include more drama films that are now available on the service.

Eternal Sunshine of the Spotless Mind (2004)*

Eternal Sunshine is one of those odd movies that doesn’t neatly fit into any one category, but that’s exactly why we love it. It’s both a tender romantic drama and a high-concept sci-fi movie, with a hefty dose of comedy thrown in for good measure. Jim Carrey delivers one of his best and most melancholy performances ever as Joel, a lovesick man who resorts to wiping his memory to get over a bad breakup. The always excellent Kate Winslet is perfectly matched as his old flame Clementine. Eternal Sunshine is one more reminder that director Michel Gondry and writer Charlie Kaufman are one of the greatest creative duos around.

Watch Eternal Sunshine of the Spotless Mind on Netflix. 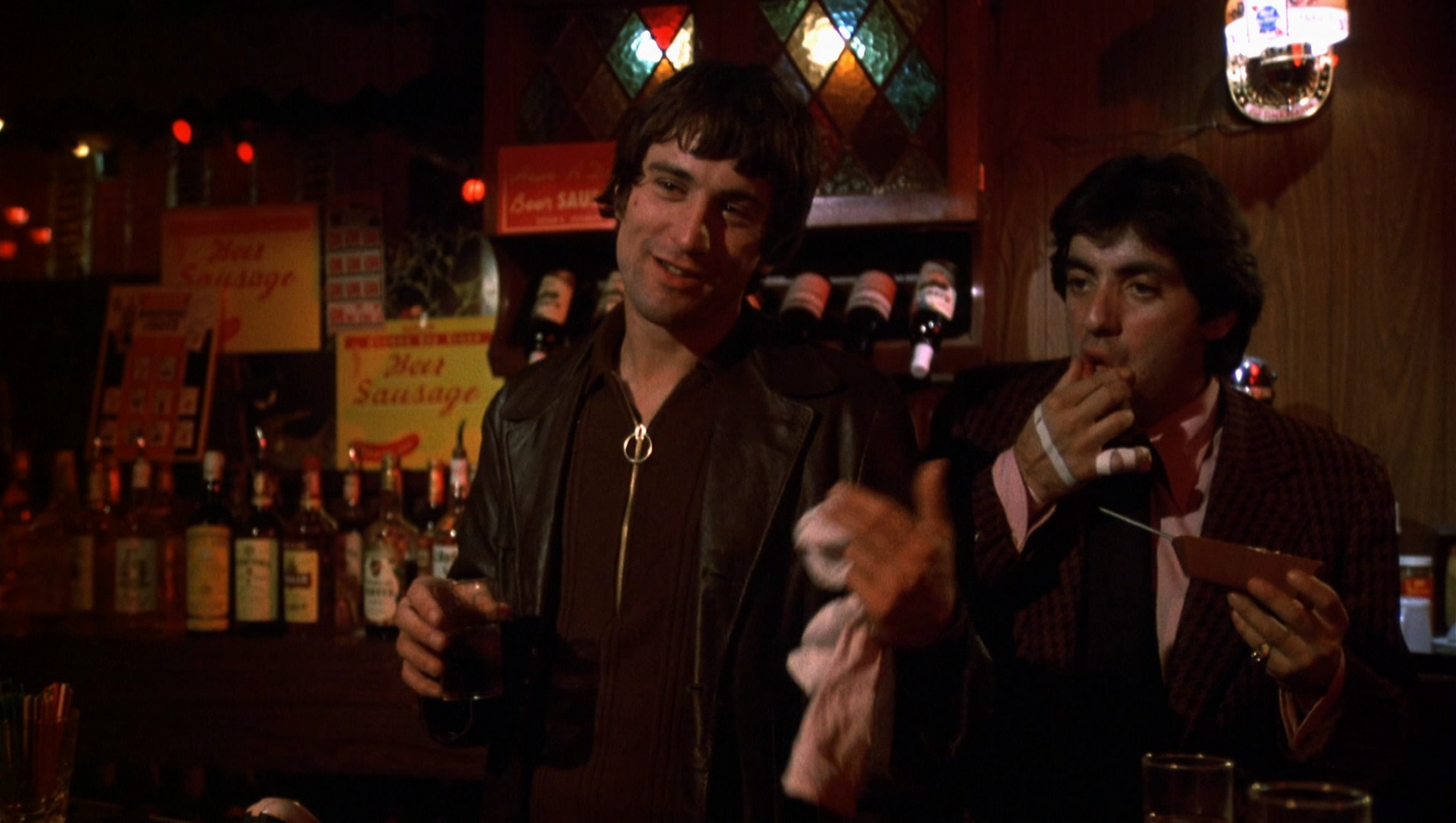 If not quite Martin Scorsese’s first film, Mean Streets is the first to truly showcase his unique voice and incredible talent. Scorsese drew from his own life in New York’s Little Italy, weaving a bleak but beautifully rendered story about two struggling crooks played by Harvey Keitel and Robert De Niro. If you love Taxi Driver or Raging Bull, Mean Streets is what made them possible. And many Scorsese fans will argue this is still his crowning achievement.

It can be tough to leave a mark on the boxing movie subgenre, given how large a shadow classics like Rocky and Raging Bull cast. But leave it to Clint Eastwood and Hilary Swank to make an old formula feel fresh again. This story of an aged, embittered coach finding hope in a promising new pupil hits like a ton of bricks, thanks in no small part to the film’s ending. Million Dollar Baby wound up winning four Oscars, and they were well deserved.

David Fincher is a true master of crime noir, regardless of whether or not his films happen to be based on real-world events. In this case, Fincher dramatizes the exploits of one of the most feared serial killers in American history. Zodiac isn’t flashy, rather relying on its intelligent script, the abilities of stars Jake Gylenhaal, Mark Ruffalo and Robert Downey Jr., and a powerful sense of mood to get its story across.

This classic Marin Scorsese/Robert De Niro collaboration is also currently back on Netflix. Taxi Driver sees De Niro bring to life one of his most iconic and disturbing characters ever – psychologically unstable cab driver Travis Bickle. No less an authority than Roger Ebert described Taxi Driver as one of the greatest films ever made. It’s not hyperbole.

Daniel Day-Lewis has quite a knack for playing ambitious, obsessive egomaniacs who destroy everything and everyone around them in pursuit of perfection. There Will Be Blood may just be his crowning achievement in that regard. Directed by the always incredible Paul Thomas Anderson, this period piece casts Day-Lewis as an oil tycoon struggling to build his fortune during the oil boom of the early 20th century. Spoiler alert – wealth is not a pathway to happiness.

The Irishman is classic Martin Scorsese, as the legendary director reunites with frequent collaborators Robert De Niro and Joe Pesci (along with Scorsese newcomer Al Pacino) for an epic saga of crime, betrayal and loss. In this case, De Niro stars as hitman Frank Sheeran and Pacino plays infamous teamster boss Jimmy Hoffa. The film’s liberal use of de-aging tech is impressive, but what really makes The Irishman resonate is the way it plays like a moving end cap to Scorsese and De Niro’s long, fruitful partnership.

Netflix ended 2019 with one of its best original dramas yet. Adam Driver and Scarlett Johansson both deliver tour de force performances in this heartfelt look at a husband and wife grappling with a long-distance divorce. Thanks to director Noah Baumbach’s steadying hand, Marriage Story avoids being an emotionally manipulative tear-jerker, but rather an earnest drama that finds both humor and heartache in the midst of a collapsing relationship.

Breaking Bad was already one of the best reasons to subscribe to Netflix, with both the AMC series and its prequel, Better Call Saul, among the best TV dramas on the service. And now Netflix has become the exclusive home to El Camino, an epilogue movie that reveals the fate of Aaron Paul’s perpetually unlucky Jesse Pinkman. It’s a worthy companion to one of the best TV shows of all time.

While it didn’t make much of a splash on the awards circuit, Burning is undoubtedly one of the best foreign language films of 2018. This South Korean drama, based on a short story by acclaimed author Haruki Mirakami, stars Yoo Ah-in, Steven Yeun, and Jeon Jong-seo as three friends who slowly become embroiled in an unsettling psychological mystery. The film is a slow burn, but one that steadily builds until it reaches a terrific payoff.

Alfonso Cuaron’s new drama Roma may be the most acclaimed Netflix Original movie so far. It’s the spectacularly photographed tale of Cleo (newcomer Yalitza Aparicio), a young housekeeper in Mexico who works for a middle-class family and becomes pregnant at a tumultuous political time. Roma’s story may be straightforward but Cuaron amplifies every major plot point with an overtness and eccentricity that rivals Fellini.

The latest film from The Coen Brothers is a Netflix exclusive, and it’s one of their finest motion pictures. The Ballad of Buster Scruggs is an anthology film, consisting of weird tales from the wild, unpredictable west. It’s perversely funny, especially in the film’s opening segment (featuring Tim Blake Nelson as a monstrous hero), but eventually Buster Scruggs settles into a melancholy, serious take on the Western tradition, telling one great story after another about the tragic inevitability and absurdity of death in its many forms.

In A Most Violent Year, Oscar Isaac and Jessica Chastain are just trying to be legitimate business people, but in the midst of a crime wave in New York City, when all their truck drivers are getting hijacked, that might not be possible. J.C. Chandor’s complex drama about moral seesawing gives Isaac, in particular, one of his very best performances (which is saying something), and offers a nuanced perspective on criminality that most movies could never get away with (if they even had the guts to try).

Watch A Most Violent Year on Netflix.

Few filmmakers had worse luck than Orson Welles, who spent decades struggling to get films made, only to often have the finished product mangled by studios, or to get screwed out of ever finishing them. One of his most notorious projects is The Other Side of the Wind, which starred acclaimed filmmakers John Huston and Peter Bogdanovich as two acclaimed filmmakers. The film completed principle photography in 1976 and it wasn’t finished until… this year. Netflix is releasing it for the very first time, and it’s an astounding motion picture, capturing all the rage and pomposity of a filmmaker just like Welles, desperately trying to make something meaningful but getting wrapped up instead in backstage frustrations like budget crises, balking producers, ego clashes, and merciless manipulations.

Dee Rees directs this rich and nuanced adaptation of Hillary Jordan’s novel, about a white family and a black family farming the same land, whose lives are vastly different only because of the color of their skin. Mudbound features impressive performances and gorgeous, earthy cinematography, and comes to depressing but vital conclusions about the impact racism has on people who have literally nothing else to prop up their egos.

The mother of a neglected child dies, and the boy winds up in a home for abused, emotionally scarred kids. And yet somehow My Life as a Zucchini doesn’t seem bitter. It’s a sincere and honest stop-motion animated drama about the capacity children have to overcome strife and unite over shared emotional pain, and thanks in part to the charming character designs, it comes across as an ultimately hopeful, lovely tale.

How We Choose the Best Dramas on Netflix

While its content lineup is ever-changing, Netflix has always been a great source of film dramas. The goal is to spotlight a wide array of what’s available, including Oscar-winning classics like Taxi Driver and There Will Be Blood and key picks from the service’s growing lineup of original dramas. We’ve tried to represent many sub-genres here, from noirs to crime thrillers to historical dramas. The goal is to ensure there’s something for film buffs of all tastes.