Plus Cowboy Bebop on Blu-ray, $99 robotic vacuum, and more. 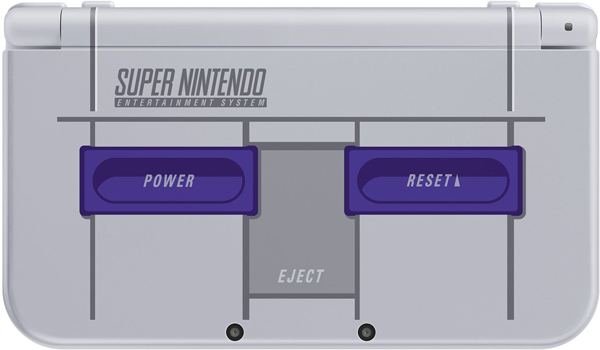 I said I was all done buying new consoles for a while and then Nintendo springs this bad-boy on us. It’s a new 3DSXL with glorious Super NES styling, and it comes with a download code for the Virtual Console version of Super Mario Kart, for that truly authentic 16-bit experience.

Keeps going in and out of stock. Not only does this bundle include Super Mario Odyssey (10/10 “Masterpiece” at IGN), you also get the Joy-Cons colored in an exclusive Mario Red!

Out Tuesday, this hardcover edition of the Akira manga is 100% complete and comes with an art book and a patch with the pill from the back of Kaneda’s jacket.

This is a very well rated television at a reduced price. Have you ever experienced the glory of an OLED screen? You think you’ve seen good-looking televisions, but you’re probably wrong.

Here’s another chance to scoop up this legendary anime series on Blu-ray. It’s packed with special features and comes in a very attractive box that will look lovely on your shelf.

Building your own PC is fun and rewarding, but it’s also terrifying, and comes with zero guarantees. Lenovo’s Ideacentre line of pre-built gaming computers are solid and will get you up and running right out of the box.

Clip the coupon on the product page and select “subscribe and save” to get this excellent deal. You can cancel your subscription at any time. You’ll have plenty of squares to spare with this bargain.

Holy smokes that’s a lot of terabytes. If you need a big old batch of storage, this is an excellent deal on a very highly rated, very high capacity external hard drive. Don’t sleep on this one.

This is one of the greatest albums in hip-hop history and you get two ways to listen for the price of one. Getting it on vinyl on Amazon gets you the Autorip, so you can start listening on your computer immediately.

Wolfenstein: The Two-Pack for $20

Buy 2, Get One Free Razer Accessories

Right now at Target you can load up on Razer accessories for your PC. I have a Blackwidow keyboard and I love it. It clicks and clacks so wonderfully, and it has programmable LED for street cred.

This robovac is self-charging, which should protect you in the event of a robot uprising. Sure, it could break free of humanity’s grasp, but since humans control the power grid, doing so would mean certain death.

It’s Sunday, so that means Best Buy has released details on its deals for the week. Gamers Club Unlocked members get 20% off new releases, along with tons of other benefits.

Not a bad deal, considering each amiibo bought separately would be $13 each (or $39 total). Gamestop is currently the only store in stock.

My wife has a Touch 2-in-1 from Dell and it’s great. Reading books, comics, and even surfing the web is so much better in tablet mode, and being able to work in laptop mode is a real treat.

Amazon Warehouse has the 6-quart 7-in-1 Insant Pot starting at $61.19 and that’s a real good price on a real good kitchen appliance. This thing does it all, from perfectly cooked rice to making yogurt. Those two things are really disparate.

I cannot stress how much creatine can make a difference in your workout. From giving you that extra push, to helping with recovery, creatine is a time-tested workout supplement that will help you see some serious gains.

Don’t let lag get you down. Everyone knows a wired connection is the best for online gaming, but it’s not always the most convenient. This router should help smooth out the bumps and data dumps caused by sub-par wifi, helping you live to fight another day, and this is almost the lowest price its ever been.

When things go bump in the night, it can be pretty scary, but when you’re the one bumping around in the dark, it’s just annoying. This seemingly magical nightlight is motion activated and turns your toilet into a portal to another dimension.

Here’s a nice deal on the Fire TV stick and Echo Dot. Amazon wants to make your TV watching experience as low-effort as possible, and this low-price deal will help achieve that goal.

If you want to get this 3-pack, Best Buy has it up for pre-order right now. We don’t know if you’ll be able to scan through the package like the original Shovel Knight amiibo, so it might be best to buy 2 sets just in case.

You can get six hotel-quality microfiber flat sheets and then match them with the six-pack of fitted microfiber sheets and make a choice: either make six different beds at once, or change one bed 6 times a week. It’s entirely up to you.

This particular model, the ZOTAC GeForce GTX 1070 Ti MINI, is a full-fledged GTX 1070 Ti in a compact form factor – smaller size for the same performance. This card will give you that extra oomph over the vanilla GTX 1070 when running 4K resolution or maxed out settings.

Currently sells for $750-$770 at most retailers including Amazon and Newegg. This GTX 1080 Ti boasts hefty overclocking out of the box, WindForce cooling system that runs cooler and quieter than the reference design, and RGB lighting for pimped out setups.

If you want the best VR headset but are still lacking a graphics card required to run it, you can’t beat the savings on this combo. The Vive alone currently sells for $600 and a GTX 1070 will cost around $400, so you’re saving $200 by buying them together as a bundle.

Awarded IGN’s 2016 Game of the Year. Considering the base game sells for $40-$50, this is a small markup for a collector’s edition (look at Destiny 2, for example). Includes Overwatch: Origins Edition, Visual Sourcebook, Soundtrack, and Soldier: 76 Statue.

This game is a horror/survival adventure that offers some pretty outstanding graphics. Almost every major character in the game can be killed (or survive) depending on your actions, so the replayability factor is pretty strong with this one. At $8 this is a steal.

Sweet $20 price drop. If you order it with 2-day shipping, it will probably get to your place by Halloween. Even if it’s not part of your costume though, it makes for a pretty awesome toy. This is a 1:1 full scale 19.75-inch play hammer with authentic designs and voice-activated lighting.

Currently still sells for $74.99 at Microsoft Store. This is a pretty sweet gift for an Xbox One owner who’s into Minecraft.

If you’re a PC gamer and you’re sick of rolling your chair over your headphone cable, snag this Logitech G930 for only $35. I’ve never seen it any cheaper, and it normally goes for $70-$100 new.

If you “like” CDKeys on Facebook, you get an instant one-time-use 5% off coupon code that drops the price to $42.74. You can knock CDKeys all you like but they ROCK for cheap Xbox Live Gold deals.

This is one of the least expensive robot vacuums I’ve seen. Compared to theprice of the average Roomba, you could buy TWO of these and clean two areas of the house. The reviews are actually pretty good, with 1180 Amazon buyers rating it 82%.

Amazon’s Deal of the Day. Get 22% off good eats at Applebee’s.

Xbox One X Release is less than 2 weeks away!

November 7 is the release day. The Xbox One X will be fully backwards compatible with all Xbox One games. In fact, several games (including this holiday season’s newest releases) will be optimized for the Xbox One X – that means smoother framerates and better graphics.

Out 11/10 – The Legend of Zelda: Breath of the Wild Champions amiibo

Like the original Breath of the Wild amiibo, these amiibo showcasing Urbosa, Revali, Mipha, and Daruk have already been hard to find.

The Cowins are massively popular with the IGN audience. I’ve bought one myself out of curiosity and my wife now uses it all the time for work. I’ve had IGN staff buy one and then buy more for their friends and family. For $39 you’re getting a headphone with 40mm large aperture drivers, wireless Bluetooth connectivity, active (not passive) noise cancellation, 30hrs of battery life, and built-in mic.

Nintendo Switch in stock on Amazon

This Edition has been sold out since E3. In addition to the Deluxe Edition of the game, you’ll also get bonus DLC, a 10.2″ Bayek figurine, map, official game soundtrack and art book all in premium packaging.

Out on 11/27. Get the new 3DS in retro SNES style glory and receive a free download of Super Mario Kart! This will undoubtedly be a mega hit during the holiday season and may be really hard to find once it’s released, so you better snag it quick.

These TVs sell for retail price elsewhere, so the gift card is free money. Gift card is emailed within 20 days and has a 90-day expiration.

Back again! For only $10 per course, you can train yourself in tools, software, and programming languages specific to the gaming industry. I and other people at IGN (and Ziff) have used Udemy and would easily recommend one of these hugely informative courses for the same cost as a Switch screen protector.

For storage that you can carry around, portable hard drives are easily the best value. They are small enough to fit in a pocket and yet hold boast way more capacity per dollar than USB flash drives. Best of all, there’s no need to lug around an extra power brick. Compatible with PS4 and Xbox One.

How do you plan on spending the Thanksgiving holiday this year? Other than eating a bunch of food, there’s not a whole lot else to do. Thankfully Ultra Sun and Ultra Moon come out just ahead of the break, so you can fill your food-comatose hours with relaxing Pokemon play.

The Best Deals on These Subscriptions

If you are lucky enough to have Verizion FIOS (fiber optic high-speed internet) coverage, there is a really great deal going on for 1yr of Triple Play service – 940Mbps downstream/880Mbps upstream internet, phone, and TV for $79.99/mo. After your 1yr is up, downgrade to internet only for $70/mo. Just as a comparison, Comcast Internet has up to 250Mbps downstream/12Mbps upstream with Blast… pretty huge difference.

How About Two Months of Gamefly for $10?

Gamefly is normally $15 a month, but you right now you can get your first two months for only $10. Watch out for that auto-renew, as the third month will be $15, but you can always set a calendar reminder to cancel in time.

Crunchyroll is Netflix for anime. Crunchyroll Premium gives you unlimited streaming access to brand new anime, ad-free, as well as tons of classics like Re:Zero, One Piece, JoJo’s Bizarre Adventure, Gintama, and Fate/Stay Night. A Crunchyroll Premium free trial is normal 15 days, but we can hook you up with a 30-day trial, so sign up before this offer gets deleted.

You might be eligible for these Amazon Gift Card deals

You’ll know whether or not you’re eligible. If you’re not, it will say so.

You can be as happy as the woman in Amazon’s promotional image with this half-off deal for students on Amazon Prime. Enjoy all the benefits of Prime, including movie and music streaming, free shipping, and more.