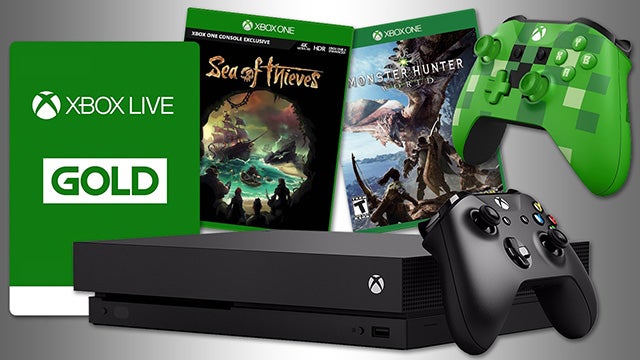 Check out our E3 2018 Xbox Deals article, which covers what Microsoft calls “The Biggest Xbox Sale of the Year.”

Check out our E3 2018 Playstation Deals article, which covers every good deal to come out of Sony’s “Days of Play Event.”

In the market for a new processor? You’d be hard pressed to find a better deal that this AMD Ryzen, which is currently 39 percent off its regular price.

Regularly priced at $59.99, the critically-acclaimed new trilogy of Planet of the Apes films is available for over 50 percent off from Amazon.

All 2,423 minutes of the popular comedy series are coming to Blu-ray this September, and you can reserve a copy of your own right now through Walmart.

PlayStation 4 Games Under $20 at Walmart

Walmart has a wide variety of PlayStation 4 titles for under $20.

Need a new pair of in-ear headphones but don’t want to break the bank? These budget-friendly earbuds from APEKX are available for under $10 with a coupon code at Amazon.

A lot of games were revealed at this year’s big video game expo in Los Angeles, many of which are available for preorder right now at Amazon at a discounted price for Prime subscribers.

Right now, Amazon is running a sale on a variety of digital Nintendo games, including The Legend of Zelda: Breath of the Wild, Splatoon 2, Fire Emblem Warriors, and more!

Regularly priced at $1799.99, this massive 4K television from Sceptre is available from Walmart right now at a whopping 50 percent discount.

Walmart also has a few other smaller models on sale:

Ubisoft’s charming tactical game for Nintendo Switch is available at a discount from Walmart right now. With new Donkey Kong DLC coming later this month, there’s never been a better time to pick up Mario + Rabbids.

If you’re in the market for a pair of Beats, you can save over $100 right now on the Solo3 wireless on-ear headphones (regularly priced at $299.95) at Walmart. There’s also a fairly wide assortment of color options, with everything from black, silver, and gold to red, white, and rose gold still in stock.

Regularly priced at $19.99, you can get Ubisoft’s crude and comedic role-playing game for PS4 or Xbox One at a 35 percent discount. For our thoughts on the game, read IGN’s South Park the Stick of Truth review.

Yonder is an open-world adventure game set in Gemea, a lush landscape with eight unique environments to explore. Check out the opening 35 minutes of Yonder for look at the game in action.

Where else can you find a 55″ Samsung 4K True HDR TV for under $500. Nowhere. Sure it’s refurbished but it does come with a 90-day warranty and better yet, you can get a 3-year extended warranty for only $47 or 4-year warranty for $69 right on the product page. If that doesn’t convince you, how about the fact that any online purchase can still be returned in-store. That means it’s easier to return a TV from Walmart than from Amazon, Dell, or any other online only vendor.

The Alienware AW2518HF 25″ 1080p Monitor is all about speed and gaming accuracy. Besides having a blazing fast 1ms response time, this is one of the very few monitors that can support a 240Hz refresh rate. It’s the lowest price I’ve seen AND you can get a bonus $100 Dell gift card with purchase.

This quadcopter done was released late last year at a whopping price tag of $199.99. The X-Wing drone is modeled after one of the most recognizable crafts in the Star Wars universe and can push speeds up to 35mph and perform 360-degree flips.

Chess: The Legend Of Zelda Collector’s Edition Board Game for $41.49

Content-wise there are few equals. This 21-disc box set includes all 236 shows and special features that amount to over 110 hours of content.

Update: Temporarily out of stock but still orderable to lock in the price

This handy device connects via your FM radio to give you wireless Bluetooth streaming in your car. That means you’ll be able to take calls handsfree (there’s a built-in mic) and stream music wirelessly from your smartphone. Even better, it has two passthrough USB charging ports.

The code works on both black and white models.

If you’re in the market for a reliable 4K UHD Blu-ray player, you likely won’t find another one at such a low price.

This is one of the cheapest prices I’ve seen so far this year for 256GB of SSD storage. It’s compatible as internal storage for your PS4, Xbox One, and PC. If you want to use it externally, you’ll need an SATA to USB enclosure.

No this is NOT refurbished! This is brand new from PCMag Shop (which is affiliated with PCMag). You’d be very hard pressed to find a GTX 1080 laptop for under $2K. This one is $1750, which is downright insane!

Free weights can go a long way towards sculpting you into the next Hugh Jackman. The SelectTech dumbbells take up very little space compared to a traditional set since you can adjust the weight from 5lbs all the way to 52lbs.

All of these deals are great, but I would personally recommend the M-series TVs. It’s widely regarded as having the best picture quality in its price range.It also supports true HDR, which means it has local dimming, wide color gamut, and sufficient peak brightness.

This is easily the lowest price I can find for a 50″ (ish) TV that has Smart functionality built-in.  When you add the TV to your cart, you have the option to extend the warranty from 1 year to 3 years for only $26.

25%-40% off Brand New Apple iPads and Watches at Walmart

We all know that brand new Apple products are very rarely heavily discounted. Not only are these very popular items marked down significantly, they’re sold by a very reputable merchant.

A 12 month subscription normally costs $59.99. If you’re going for Gold for the long haul, it’s much cheaper getting the 12-month sub over the smaller 1-month, 3-month, or 6-month subs.

For only $9.99 per course, you can train yourself in tools, software, and programming languages specific to the gaming industry. I and other people here have used Udemy and would easily recommend one of these hugely informative courses for the same cost as a Switch screen protector.

Open in an incognito window to see this price.

Alex Osborn is IGN’s Web Producer. Find him on Twitter at @alexcosborn.