Plus RDR 2 Xbox One bundle deals are still live 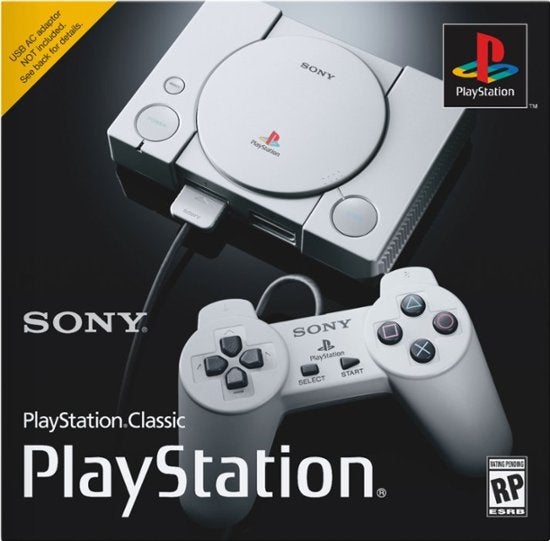 The full line-up of PlayStation Classic games was just announced and it definitely puts the classics in PlayStation Classic. I can say with authority the original Metal Gear Solid still holds up, as I played through it again about a year ago. Preorder it now for its December 3 release.

If you like Space Grey, have I got some great news for you. The Space Grey iPad Mini 4 is on sale at Walmart right now. With 128GB storage, there’s tons and tons of space to store all your apps and music and whatever else you want to store on this bad boy. Also it has free 2-day shipping, so that’s a bonus.

Samurai Jack: The Complete Series for $69.49

This is one of the best animated series of all time, and now you can own it all in one fell swoop in this Blu-ray boxed set. The set normally sells for $112.99.

This sponsored deal is brought to you by Dell Home.

Not only is this the lowest price we’ve seen for an RTX 2080 Ti prebuilt computer, it’s from a very established brand. Alienware offers fully 1-year warranty and allows you to swap out components without voiding any warranty  Specs include an Intel Core i5-8400 6-core processor, 8GB of memory, and 1TB HDD. The RTX 2080 Ti, which is a full 30%-40% faster than the GTX 1080 Ti, will crush any game that you throw at it, even in 4K.

Out Tomorrow: Batman: The Complete Animated Series on Blu-ray for $99.96

Not only is this the complete set of the Batman: The Animated Series, it has two movies, a book, includes exclusive Funko! Pops, and it comes out tomorrow. But what’s even better is its been remastered for high-definition, so it looks better than it has any right to look.

If you’re after a down-and-dirty high-definition tablet, the Amazon Fire HD 8 is just what you’re after, and it’s on sale right now. For $60 you get a competent tablet that does basically everything you want a tablet to do. This is the newest model, too, and it’s a brand-new, not refurbished, item.

This is a smoking fast high quality router, and it looks like a super car or a fighter jet. Don’t try to make it fly, though. It lacks wings and an engine. It’s still really fast, though.

This is a nice, middle of the road Samsung 4K TV. It has plenty of excellent features, the exact sort of thing you might want for playing Red Dead Redemption 2 in HDR for example. It’s also on sale and it has free 2-day shipping, so this could be in your house by Wednesday, hypothetically.

This sponsored deal is brought to you by Verizon FIOS.

FIOS, Verizon’s fiber optic internet service, is limited to only a few areas in the United States, Those lucky sons of guns who have it have access to super fast internet at a price that Cable or DSL companies simply cannot compete with. Once you’ve had a taste of fiber, there’s no turning back.

If you’re looking for a high-quality ultra-high definition display, consider this refurb model from Samsung. You can extend the warranty if you want, but Amazon ships it with 60 days of free phone tech support.

For those who already have a currently running Xbox Live Gold subscription, buying a new subscription stacks onto your current one. So if you still have 3 months left, adding this will give you 9 months.

To get this deal, simply check out with one 3-month membership in your cart. At the very last step of checkout you should get a message noting that you are eligible for another 3 months. Once you’ve made our purchase, it should be automatically be sent to you via email.

These are finally back in stock after weeks of not being available. Walmart is selling these AWESOME arcade cabinets for $100 less than retail price and offering free 2-day shipping. They ship immediately.

You must be logged into your Amazon Prime account to see this deal. This deal is reserved for new subscribers only (although there are reports of people who have cancelled Audible in the past are also eligible). May be for select Amazon Prime accounts only.

This is even better than the Amazon Prime Day deal, which offered 3 months for $15. With this membership you can listen to Amazon Audible’s extended audiobook library whenever and wherever you want. Every month you also get 1 credit worth 1 audiobook at any price. This you can keep forever.

If you commute long hours daily, then this is definitely for you.

Dell Outlet is currently offering up to 17% off Dell Outlet configs. Usually the compromise with refurbished items is the shorter (or lack of) warranty, but not with Dell Outlet. Dell Outlet PCs have the same 1-year warranty.

Some current examples. For the Dell G series, I would strongly suggest the “G7” lineup since it has better build quality than the G5 or G3 for a very minimal price premium at Dell Outlet.

For only $9.99 per course, you can train yourself in tools, software, and programming languages specific to the gaming industry. There are thousands of course to choose from, and many of them are from accredited instructors that supply you with tutorials, training videos, assignments, and more. Taking the courses in school could costs gobs of money.

Open in an incognito window to see this price.

Black Friday is only 2 months away. BlackFriday.com and BestBlackFriday.com have already come up with a list of predictions on what will be the best deals during this upcoming holiday season. Check them out.

Seth Macy is IGN’s tech and commerce editor and he can’t believe you’re reading this.