If you haven’t checked out our God of War review, go ahead and have a look and then come right back here.

…welcome back. As you have now seen, God of War is a modern masterpiece, and we can’t wait for the whole world to check it out for themselves in a few days.

The game joins rare company. Below we’ve compiled every modern game we scored a 10, along with where and how you can play them right now. On a personal note, there are so many games on this list that rank among my all-time personal favorites, and seeing them laid out has me wanting to revisit them. In some cases, I went ahead and listed the collections or follow-up editions rather than the original game, because they’re better deals, include extra content, or are just easier to pick up and play in 2018: 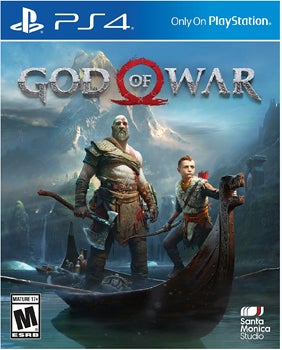 You can still pre-order and save on God of War, the game we most recently gave a 10. Check out our God of War review to see what makes it a masterpiece. UPDATE: God of War is in and out of stock on Amazon, so check back.

This isn’t the only indie game on our list of 10s. Far from it. But it’s definitely the most recent and a great addition to your library. If you aren’t familiar with it, read our Celeste review to see why it captivated us so much.

This is one of my favorite games in recent memory, and it’s an absolute delight. This is a must-have for Switch owners. One of my favorite gaming moments, ever, is in this game. I won’t spoil it if you haven’t gotten around to playing it, but it’s such a love letter to gaming it warms my heart.

The Legend of Zelda: Breath of the Wild

This isn’t only one of my favorite games on this list, it’s one of my favorite games of all time. I absolutely fell in love with Breath of the Wild and in the 150+ hours I spent playing it, never lost that sense of wonder that swept over me from the second I stepped out of the cave and into its world. Our Legend of Zelda: Breath of the Wild review basically agrees with me, which lends me some credibility. Finally.

This is a bargain because you get a 10 and its fantastic predecessor all in one package. In our Inside review, we make mention of what it did to expand on the amazing game that is Limbo, so having them both at once is a great way to appreciate them.

You can download Undertale, and it’s coming to Nintendo Switch eventually, but if you’re into Undertale, you’re probably super, really, insanely into it. It has that effect on people. Our Undertale review called it a true work of art, and if you love this game you’re probably trying to justify the huge cost of the collector’s edition right now. Admit it!

This is my other most-favorite game on this list. I love Metal Gear Solid V, way more than I expected. This package comes with its pseudo-prequel Ground Zeroes, and it’s the best way to experience the game if you haven’t already. In our Metal Gear Solid V review we lauded its creativity and intelligent approach to missions, and I have to agree. You can hide from enemies in a porto-potty and then play a tape of a guy having painful diarrhea as a way to throw guards off your trail. I am 100% serious. This might be my favorite game of all time.

The Witness is a puzzle game that doesn’t confine you to a simple case of increasingly-difficult, linear progression. There’s so much to see in do in The Witness. In our Witness review, we called it a “graceful combination of tangible goals, obscurity, and freedom,” and it’s a classic that should be experienced by everyone.

The Legend of Zelda: Skyward Sword

I own this game and yet I have to admit… I never got around to playing it. I know, right? The worst. It’s the only Zelda game on console I haven’t played and I guess my weekend plans are locked. In our Skyward Sword review, we called it “the Wii game we’ve been waiting for.” This is another controversial 10, to be sure, but there’s no denying its a game at least worth experiencing.

The Last of Us

The best way to play Uncharted 3 is to buy the Nathan Drake Collection on PS4. You could get the game of the year edition for PS3, but why not just get all the games, remastered, in one fell swoop? In our Uncharted 3 review, we couldn’t say enough nice things about it, from graphics to gameplay to the chemistry of the cast.

Grand Theft Auto IV took the promise of GTA3’s Liberty City and turned it into something glorious. And ridiculous mods and fan servers have kept the PC version going strong, even to this day. In our GTA IV review we praised it for a refined version of the GTA formula we’d all come to know and love.

Undead Nightmare, not Red Dead Redemption, is the 10 in this series. The Game of the Year edition is the best value for your buck. In our Undead Nightmare review we said there’s “a lot of fun to be had,” and what’s even better is Red Dead Redemption has Xbox One X support, so you can play this on your modern hardware and have it look sharper than it ever was imagined to look.

When this game came out, I played the first board relentlessly, honing my abilities until I was ranked 127 in the world. I was never able to break the top 100, which was a real bummer, a failure that still haunts me to this day. Our Pac-Man Championship Edition DX review points out how the simplicity of gameplay is perfectly juxtaposed by the complexity of mastery.

Here’s another collection that’s the perfect way to play a 10-scored game. I bought this collection specifically to play MGS4 but found myself replaying all the earlier games in the series, too. It even has the original Metal Gear and the MGS VR Missions. In our Metal Gear Solid 4 review, we asked “Is it possible to give a game an 11?” Turns out… it isn’t.

Let’s all work together to wish upon a star and hope our collective magic works to convince Nintendo to bring this amazing game to the Switch. It took everything great and amazing about the original Mario Galaxy game and did it even better, creating one of the best video games of all time. Don’t believe me? Check out our Super Mario Galaxy 2 review. It’s got my back.

The Legend of Zelda: Ocarina of Time

With all that talk about Breath of the Wild up there, I almost forgot about my other favorite Zelda, Ocarina of Time. The 3DS remake is probably the best way to replay this amazing classic, and it still holds up. Really well, actually. The wonder I first felt when I played this game on N64 wasn’t replicated again until I played Breath of the Wild. Check out our original, super-old Ocarina of Time review from 1998 by some guy named Peer Schneider. What ever happened to that dude?

Seth Macy is IGN Tech and Commerce editor and is probably going to replay Ocarina again. Follow him on Twitter @sethmacy.