Will Hidomi and Ide ever catch a break?

Warning: This review has full spoilers for the episode.

Although the end is nigh is for FLCL: Progressive it feels like it is finally hitting its stride in terms of creativity. Jinyu’s absence paves the way for a confrontation between Haruko and her students, but not without some unexpected twists along the way. Additionally, the artistic experimentation on display in the last episode is back and firing on all cylinders, resulting in what is possibly the show’s most bizarre and beautiful episode yet. 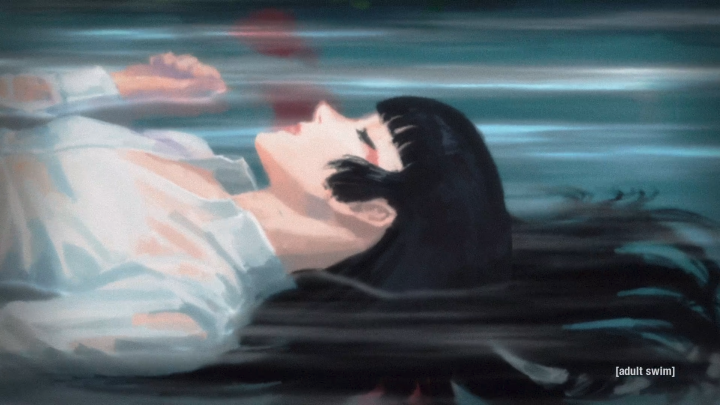 The first thing you will undoubtedly notice about “Fool on the Planet” is the new art style, which evolves into several other fantastic art styles across its short runtime. It starts with a charcoal painting look that transitions into a rough sketch style and even a manga style that is sure to be familiar to fans of the original series. These transitions don’t only happen scene to scene, but sometimes even frame to frame, resulting in some incredibly breathtaking moments.

The diversity of art styles is a perfect pair to this episode’s numerous action scenes, beginning with a battle between Ide and Haruko. Their fight begins when Haruko tries to advance on Hidomi once again, though calling it a fight would be a little generous to Ide. After a short struggle Haruko straddles the defeated Ide, goading him with thinly veiled erotic taunts. She loses her cool when he retorts with “you don’t satisfy me!” and I once again found myself trying to disentangle their relationship. Haruko’s flirty provocation of Ide in undoubtedly similar to what she did to Naota, but unlike Naota Ide doesn’t seem interested and instead pursues the (presumably) human Hidomi. If Naota’s story was about embracing adulthood, could Ide’s be about rejecting that societal pressure? Progressive offers no definitive answers, but, as always, it is fun to speculate.

Hidomi, however, has other things on her mind. Through a beautifully animated flashback we learn that Hidomi’s mother has decided to close her cafe. This seems like a pretty harmless piece of information, but we can tell from her reaction that the cafe was some sort of physical representation of her hope that her dad would return. The decision to close shop is to Hidomi an abandonment of that hope. The stress of this information on top of seeing Ide and Haruko in that compromising position causes her N.O. portal to open and drag some part of Ide inside, leaving behind a strange rubber corpse.

Elsewhere in the world Aiko’s father and his elderly compatriots are putting the finishing touches on their nefarious amusement park. My suspicions that the group is part of the Department of Interstellar Immigration appear to be correct, but I did not expect Haruko to be working alongside them. She convinces her students to visit the theme park where their N.O. energy is harvested to power the group’s giant robot, which they immediately use to attack the Medical Mechanica factory. I was left with several questions: Why would Haruko work with the Department of Immigration? How are they harvesting the N.O. energy? Why do they have Canti’s corpse? It’s a lot to take in, but it’s evident that all this posturing is setup for a big finale in the next episode.

Speaking of the finale, I couldn’t go without mentioning Ide and Hidomi’s final moments of this episode which have big implications for the FLCL: Progressive’s conclusion. In the aftermath of the aforementioned giant robot battle, Ide’s rubber corpse ends up floating through space where it is picked up by a Department of Immigration satellite. The corpse is then eaten by Canti’s robotic head, which has taken on the appearance and mannerisms of a small dog. If this sounds familiar it’s probably because this is exactly what happened in the final episode of FLCL. If the Medical Mechanica “dog” from FLCL turned into a world-destroying machine, what will happen to Canti upon eating an someone with a rather powerful N.O. like Ide?

Back on Earth, Hidomi has assumed her robotic form and set out to find Haruko and get Ide back. Hidomi immediately attacks Haruko, but upon realizing her punches have no effect tries a different tactic. Hidomi brings up Haruko’s obsession with Atomsk, calling her “just a girl in love.” I couldn’t help but cheer for Hidomi finally breaking out of her damsel role and becoming a more active character, and I love that she turned the tables on Haruko and put a spotlight on her romantic woes for once. Before Haruko can react to the accusation she looks up to the sky, which has suddenly turned bright red signaling the arrival of Atomsk (just in time for the end credits).

Progressive doubles down on its efforts from last week and delivers another stunning episode in “Fool on the Planet”. Nearly every major character gets a moment to shine in this eclectic episode, which veers between funny, sad, and exciting at a breakneck pace. With only one episode left Progressive is perfectly poised to deliver a great finale, assuming it has something special to say.