Sometimes being a sympathetic ear is exactly what your friends need.

One of the standout things about the Persona series is the way it celebrates the power of friendship.

Yes, each instalment has its own unique thematic thread. Persona 3, for example, dealt with kids confronting their mortality, while Persona 4 highlighted the importance of accepting who you are, even the bits you don’t like and, more recently, Persona 5 asked if it was possible to redeem evil people by forcibly changing their hearts and whether it’d be ethically right to do so.

Yet, throughout of each these games, the protagonists explore these themes by forming unbreakable bonds with those around them. 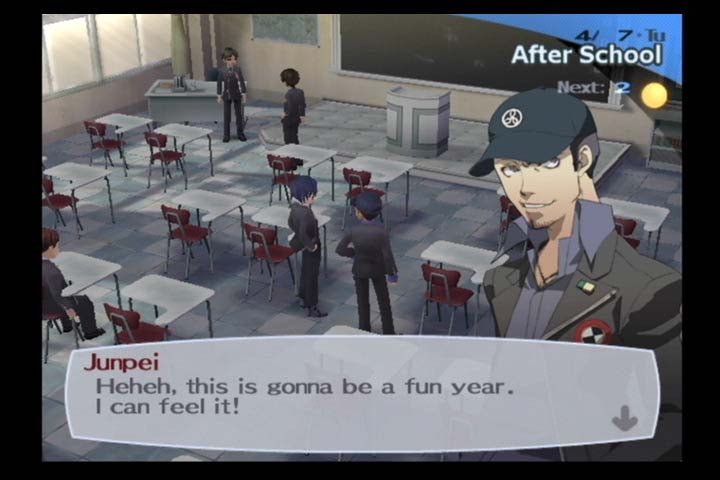 Getting to know other students in is central to Persona 3 and the series as a whole.

Since Persona 3 especially, the series has demonstrated this both in storytelling and systematically with the ‘Social Link’ system, which is as mechanically important to your party’s progress as traditional levelling through combat. By spending time with the protagonist’s friends in their downtime, active party members or otherwise, you can regularly unlock new abilities and boost the strength of the personas you create, which are the weapons used to battle enemies in the series’ twisted other-worlds.

Your party’s overall power grows in tandem with the strength of the player-character’s bonds.

Put simply, your party’s overall power grows in tandem with the strength of the player-character’s bonds.

Each social link, however, is also a fascinating story of personal growth, as Persona’s supporting cast members find themselves overcoming relatable predicaments, and in some cases begin their adventures utterly broken.

In Persona 5, to stay with the most recent example, the protagonist’s first dysfunctional friend, Ryuji Sakamoto, is an incredibly angry young man.

Ryuji has some stuff to work through.

Raised in an abusive family and seen as an inconvenience throughout his life, he’s become accustomed to being the outcast, a status further entrenched in the minds of others after a violent altercation with a teacher, Suguru Kamoshida. Ryuji came off worse with Kamoshida injuring him in “self-defence”, leaving him unable to compete in athletics (his only real passion) and causing the disbandment of the Shujin Academy track team.

It soon becomes clear, though, that all is not right at Shujin and that Kamoshida is not the innocent party he’s portrayed. He’s outright feared by anyone who deals closely with him, and for good reason; he is both physically and sexually abusive to the volleyball team in his charge, even driving one student to attempted suicide. We also discover that he goaded Ryuji into their fight, knowing his temperament and how to push his buttons, before purposely injuring him to prevent the track team from stealing the limelight from his all-conquering volleyballers.

And it’s here you realise that Ryuji’s anger problem, though it is a problem, is not entirely misplaced but instead the only reaction he knows. What the protagonist can see that others cannot, however, is that Ryuji generally means well but makes bad choices, and when provided the chance to stop the suffering of others via the metaverse he gladly takes it, such is his desire to do good.

And though this is surely a great outlet for Ryuji’s pent-up aggression, and the team go on to stop Kamoshida by stealing his heart in the metaverse, which in turn forces him to publicly admit his crimes in the real world, you don’t get a sense for Ryuji’s true character until after his revenge and his social link chain becomes available.

Ready to fight his demons – in every sense.

What follows is a lot of soul-searching as Ryuji unpacks what is and isn’t his fault and comes to understand how he could have reacted better in the situations that have defined him. He witnesses the broader repercussions of his anger which, although sparked by his reaction to a definite injustice, saw others negatively impacted by his rash decisions. He also strives to make amends with those caught in the crossfire.

It’s the passive role that you, as the protagonist, play in Ryuji’s recovery and redemption that’s the most interesting aspect.

Helping him work through this at every step is you, and it’s the passive role that you, as the protagonist, play in his recovery and redemption that’s the most interesting aspect.

Although you get to select advisory responses during your conversations with Ryuji that can maximise your bonuses, the protagonist is basically an ear to his problems. He doesn’t judge, he just listens as Ryuji uses him as a soundboard against which to break down his problems and eventually find his own solutions.

If you felt attached enough to Ryuji to see him become a level 10 confidant, forging an unbreakable bond with him, you see him make peace with both himself and the others he unwittingly hurt. He’s thankful for the player-character’s support, of course, but outside of choosing to spend time with him, you didn’t make that happen, he did it himself. You were simply available to him as he reasoned his situation out.

All aboard the friend ship!

This happens with nearly all the folk that Persona 5’s protagonist – and indeed all the protagonists since P3 – befriends: Mishima suffers from low self-esteem and is desperate to prove that he’s not a loser, and learns that there are better ways to prove that than loudly and publicly. Futaba has spent most of her life as a shut-in due to a heart-breaking childhood, and slowly overcomes a crippling social anxiety. Makoto has spent so long focusing on getting great grades that she doesn’t know how to be a teenager, and spends her arc letting loose and learning how to be less robotic.

And central to all these situations is the protagonist, who only ever acts as an outlet, letting each friend vent as they figure things out for themselves. In the rare cases where intervention is required, then they tackle it together as a team.

The resolution to a character’s personal issues comes not from superpowers, but from two humans connecting.

We’re so used to video games placing us in the role of the world’s sole problem-solver, the one source of positive change, fixing the issues of the lowly and weak by taking charge of their situations. The Persona series does this too in its overarching plots, where fights take place against otherworldly creatures and gods, but in the social links away from the metaverse and its shadows, where its characters face everyday problems, it also highlights the ability to listen as a powerful tool to battle a different type of demon.

And with this, the resolution to a character’s personal issues comes not from superpowers, but from two humans connecting. This echoes real-life, where it’s absolutely not possible to solve everyone’s problems through your own direct action, and in most cases they wouldn’t even ask that of you. Simply making yourself available to them can be enough, and give them the strength to sort the rest out on their own.