Note: this is a spoiler-free review of Scooby Doo! & Batman: the Brave and the Bold, which is available now on DVD and Digital.

DC’s direct-to-video animated movies have veered in a darker, more adult-oriented direction in recent years. 2016’s Batman: The Killing Joke even has the distinction of being the first R-rated Batman movie ever released. Despite this trend, it’s hard to ignore the fact that these movies tend to work best when they take the exact opposite approach. Much like the two Batman ’66 animated movies, Scooby Doo! & Batman: The Brave and the Bold works precisely because it embraces a more lighthearted, zany side of the Caped Crusader.

This is hardly the first time Batman has crossed paths with Scooby and the Mystery Inc. gang in the animated realm. They joined forces twice during the course of the 1972 series The New Scooby Doo Movies, and again in a segment of the Batman: The Brave and the Bold episode “Bat-Mite Presents: Batman’s Strangest Cases!”. But whereas that episode was still geared towards spoofing the quirky style and crude animation of classic Scooby Doo!, this movie is very much a direct continuation of Batman: The Brave and the Bold. That alone should be incentive for any fans of that tragically underappreciated series.

The film opens predictably enough, with the Mystery Inc. crew pursuing a case in Gotham City, running afoul of a a costumed evildoer and being saved by the Dark Knight. Basically, the same story as all the other Batman/Scooby team-ups. But the film veers in a slightly more interesting direction as Batman recruits his new allies to join his team of crime-fighting mystery-solvers. From there, the Mystery Inc. gang find themselves helping Batman solve the one case in his career he’s never been able to crack (no, not that one).

It’s not as though Scooby Doo! & Batman is a particularly deep, plot-driven movie. For most of its modest 70-minute run-time, the plot is little more than an excuse to highlight this unusual pairing of heroes and celebrate the tropes of both franchises. The driving mystery of the film feels underdeveloped until the climax, at which point viewers are bombarded with one plot twist and fake-out after another. It’s enough to make you yearn for the days when the Mystery Inc. crew would unmask the devious middle-aged con artist and then move on to the next case.

But whatever the film lacks in terms of a compelling plot, it makes up for in sheer entertainment value. Much of the original appeal of Batman: The Brave and the Bold was in how it blended the campy sensibilities of Adam West’s Batman with the art style of Dick Sprang and a very self-aware sense of humor. That quality has survived despite the show being off the air for over six years at this point. Bader’s morally upright, slightly stuffy depiction of the Caped Crusader remains as enjoyable as ever. The same for DiMaggio’s dimwitted Aquaman and Kenny’s zany Plastic Man. DC fans will get a kick out of the nonstop stream of cameos and references to Batman lore, including a flashback scene that depicts Batman in a appropriately Bob Kane-inspired costume and Batmobile.

That pairs nicely with the film’s approach to the Scooby gang. Thankfully, Scooby Doo! & Batman foregoes the aggressively obnoxious animation style of Be Cool, Scooby Doo! for the more traditional approach seen in the various direct-to-DVD animated movie dating back to 1998’s Scooby Doo on Zombie Island. The two worlds mesh pretty cohesively in both look and tone. So many of DC’s animated films are based on existing comic book works, and almost invariably they struggle to replicate the visual style of the source material. But here, with the thick, stylized figures and bright colors of Batman: The Brave and the Bold bumping up against the moody environments and monsters of Scooby Doo!, you have a genuinely slick-looking animated movie.

It never gets old seeing the heroes and villains of Gotham City dragged into the slapstick comedy and chase scenes of the Scooby Doo! franchise. And in the process, the film actually sells the idea that Batman and friends would need the Scooby Gang’s particular set of skills to save the day. There’s just something about these two franchises that allows them to work well together.

It does feel as though there’s a certain amount of missed opportunity when it comes to the character dynamics. Much like last year’s LEGO Batman Movie, there’s an undercurrent of sadness to Batman’s life as it becomes clear how lonely and isolated he’s become over time. The film had a real chance here to tap into something there. The recent Batman/Teenage Mutant Ninja Turtles comic book crossover established the Turtles as an unlikely new family for the Dark Knight, and there was room for this film to do something similar. Sadly, Scooby Doo! & Batman never delves as deeply into that element as it could, nor does it make much of the loose romantic triangle involving Fred, Daphne and Black Canary. But at least there’s always room for a sequel. 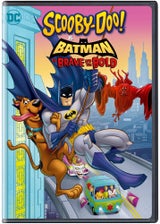 Scooby-Doo! & Batman: The Brave and the Bold

Super sleuths Scooby-Doo, Shaggy, Fred, Daphne and Velma join forces with the world’s greatest detective, Batman, when they discover that villains from both of their respective rogues’ galleries have also combined efforts to terrorize the city.

Scooby Doo! & Batman: The Brave and the Bold isn’t going to connect with all DC fans. It’s a very lighthearted alternative to darker, more violent animated movies like Batman: The Killing Joke and Batman and Harley Quinn. But what else would you expect from a film that pairs some of DC’s biggest heroes with the Scooby gang? Those looking for a fun, goofy crossover adventure won’t be disappointed.