This IS the droid you’re looking for.

Solo: A Star Wars Story features plenty of memorable performances, but perhaps the most valuable new addition to Star Wars canon is L3-37, a spunky new female droid voiced by Fleabag creator and star Phoebe Waller-Bridge. While her storyline has a few unexpected twists, L3 stands out as much because of her personality as because of the plot – she’s a much more informal (and rebellious) droid than the likes of 3PO or Rogue One’s K-2, as well as being the sidekick of undisputed Solo MVP Lando Calrissian (Donald Glover).

The painfully funny (and sometimes just plain painful) Fleabag became a breakout hit for Amazon and the BBC in 2016, but 2018 promises to be an even bigger year for Waller-Bridge, between the the multihyphenate’s Solo outing and her critically-acclaimed new BBC America thriller Killing Eve, which ends its freshman season run on May 27.

Waller-Bridge doesn’t appear in Killing Eve, but her fingerprints are all over the witty spy series, which pits grumpy MI5 agent Eve Polastri (Sandra Oh) against the unpredictable and devilishly psychotic assassin Villanelle (Jodie Comer) in an obsessive cat and mouse game that is every bit as fascinating, addictive, and disturbing as the dynamic between Hannibal Lecter and Will Graham that kept us hooked on Hannibal. 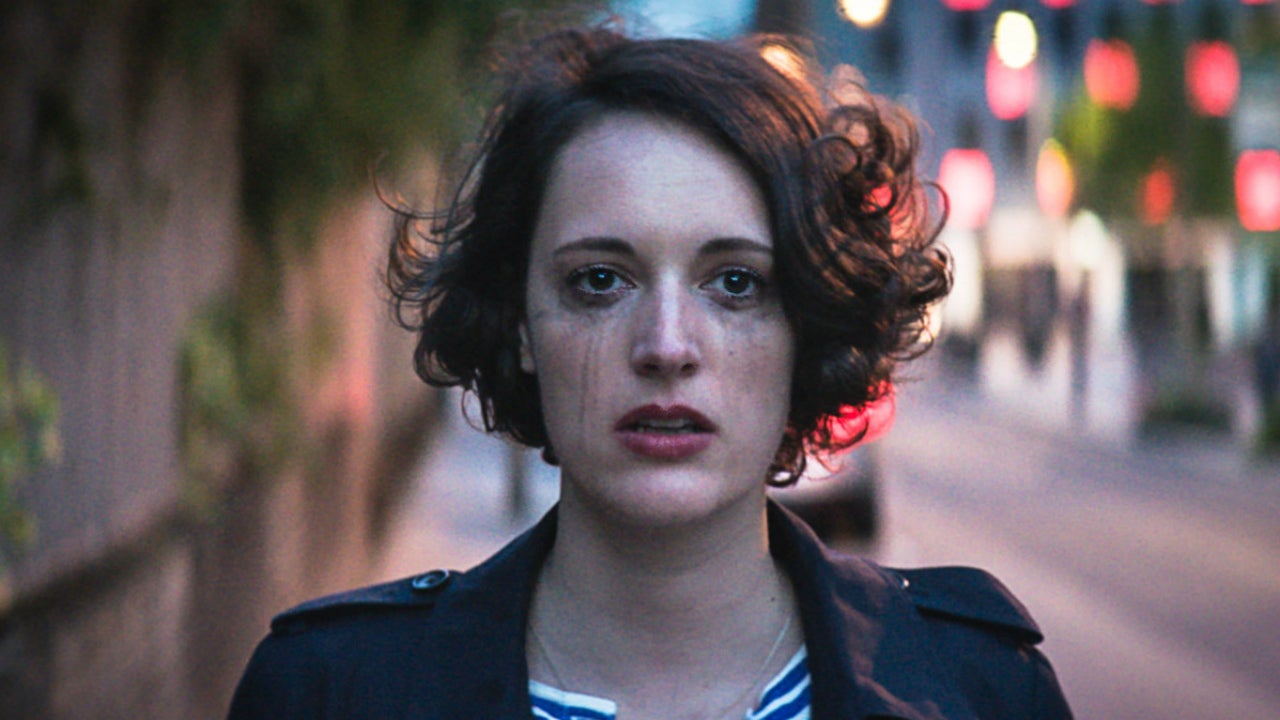 IGN recently spoke to Waller-Bridge about her experience filming Solo with Phil Lord and Chris Miller, and then with Ron Howard, the director who replaced them, when the actress promised that Howard would make “a beautiful film,” while also keeping “a lot” of Lord and Miller’s footage. We also took the opportunity to chat to Waller-Bridge about adapting Killing Eve, which is based on a series of novellas by Luke Jennings, and discussed how she intends to subvert the tropes of the spy genre with her equally skilled (and equally messed up) female protagonists.

What appealed to you about Luke Jennings’ novellas and the project as a whole, when you first heard the concept?

Phoebe Waller-Bridge: The idea, from the off, of writing a thriller, just came from the left field for me, because I was very much still in Fleabag-land – I’d just written the play. So I wasn’t really thinking on those terms, so when I got the call from Sally [Woodward Gentle, the show’s executive producer] saying “I’ve got a thriller about a female assassin,” already I was like, “yes, I’m reading it!” And then Luke’s writing, really, and how he dreamt up these two complete polar opposite women who are completely obsessed by each other. I think it was that, really, getting into them and just knowing that these women probably never should have crossed paths in their lives, and knowing that they’re going to. And that darker world of the espionage world was fun to dip into, but it was really the psychology of these women, and their obsession with each other that I thought was unusual and wanted to write.

How did you get a handle on who Eve and Villanelle were during the writing process?

There were little clues that Luke had put in the novellas that were jumping off points. I remember the first time we saw Eve, he describes her as having messy hair that she doesn’t care about. She’s having a cigarette, and she’s a bit bummed out because of something. But there’s something grumpy and tired about her that I just thought, “well she’s obviously someone who, her alarm doesn’t wake her up, and her washing always comes out the wrong color, and she’s one of those people.” She’s basically me. And that’s such a nice starting place for somebody who works for MI5, somebody so official and powerful is actually just as messy as the rest of us. And so then she started jumping off the page, in that she was funny and witty – as she is in Luke’s novellas as well.

And Villanelle, she was more of an adventure to write. Because, to be honest, I don’t think I really found her until Jodie tipped up with that performance. And then together we were working on her spontaneity more, because I wanted her to feel so gloriously unpredictable, without being kind of quirky and random. Because she’s just trying to entertain herself the whole time, and I can relate to that. And I thought, if you’re trying to entertain yourself the whole time, and yet you have no fear of consequence of your actions, then you are the freest person. I just thought, “God, that would be so great!” Minus the incessant murdering of people.

And then the moment Sandra came on board as well. I honestly knew, the moment Nina [Rodrigue] had called from BBC America and said her name, I was like, “if we don’t get her, I’ll never recover. Because I can’t imagine anyone else.” And then we worked together very closely on [Eve’s characterization].

What draws these two women to each other?

I think they are instantly impressed by each other, for whatever reason that is, which will be unveiled as the series continues. I think it’s easy to understand why Eve is beguiled by Villanelle – I mean, I am. I envy Villanelle hugely, and she’s my hero. But there’s something about Eve which is innately truthful, and honest. And I think that Villanelle operates on such a complex level of manipulation, and she’s all about secrets and lies, and manipulation. And I think Eve’s clarity, and her ability to spot her, appeal to [Villanelle’s] narcissism hugely. But also is something she knows she doesn’t have. It’s the one superpower she doesn’t have, just the kind of truthful humanity. And so they kind of do that for each other.

Jodie Comer as Villanelle and Sandra Oh as Eve

The pitfall of so many cat-and-mouse style thrillers, especially when it’s a cop chasing a killer, is that you never want to make your hero feel inept because the bad guy keeps getting away. How do you maintain that tension between them without letting one or the other suffer for it?

First of all, we made sure that Villanelle was the best, and she had been outsmarting all the intelligence organizations all over the world. And that no one knew of her existence, even… And it’s Eve’s instinct which makes her wonder if this is a woman, and maybe she’s got more going on, because she’s collating all these kills. We decided it was so impossible, there just weren’t clues, [so it’s not] your classic kind of detective “what is this hair in this hairbrush?” situation. We kept saying, “we just don’t want to keep having conversations about DNA every episode.” And so it was much more about Eve trying to work out Villanelle’s psychology, and the pressure on her to find the people who are running Villanelle, [which is] something she’s not that interested in, actually. That would actually be that more classic story. She’s like “I wanna know where this woman’s come from, how did she end up being an assassin, is she a psychopath”? And she kind of goes that way around. So she’s kind of taking a path that doesn’t have so many potholes, or plot holes, that something like that might lead us into.

What were some of the tropes of the spy genre you were eager to dismantle or subvert, since it’s such a well-explored playground thanks to the likes of James Bond and Mission: Impossible?

Villanelle being kind of scantily dressed, lying across a chaise lounge with a gun, was something we knew instantly was never going to be in it. And that was never Luke’s intention in the books either, he had the same thing. I was really looking to Villanelle being playful and sweet, and that being the thing that felt odd. And so for her to be this kind of fun person to be around, that she doesn’t carry the weight of her past and her psychopathy everywhere she goes, and she’s not cowering in shadows, flicking knives at people. She’s much more in your face, and wants to play with the mouse a little bit more.

And with Eve, I feel like I’ve seen steely, sexually inhibited, hard, kind of masculine women in roles like that, in energy. And I just wanted her scattiness and life to feel so important to the show – and on the back of that, to emphasize how good she is. But the thing I really was looking forward to was when Eve gets s**t-scared. There’s a couple of moments when, my learned instinct of the genre is, she hears a noise somewhere, and so she’s immediately back against the wall, gun, serious face, serious music, and then she sees something frightening, and she just instantly has this training. Which Eve doesn’t. She’s basically a desk jockey. And so when she hears that sound, she just screams and runs. Which is what we would do. But it’s her emotional intelligence that gets her ahead.

Killing Eve airs Sundays at 8 p.m. on BBC America. You can stream the first episode without a cable subscription on BBC America’s website, and log in with your cable provider to catch up on the whole season. For more on Solo, check out all the easter eggs, references and trivia we caught, the story behind that surprise cameo, and that video game reference we weren’t expecting,

Laura Prudom is the Executive TV Editor at IGN. You can talk to her on Twitter at @LauinLA.