The Kick-Ass board game is all about being true to the comics.

Kick-Ass is a hard comic to capture. Its colorful and funny, but also ultra-violent and gory. It’s a story about superheroes who aren’t actually super, and still have to deal with regular things like money and chores.

And while the movies have done a great job of capturing that attitude, the few video games based on them have fallen extraordinarily flat. So it’s pretty funny that a board game, with no blood or fast-paced action to speak of, is one of the most faithful recreations of Kick-Ass that I’ve seen.

Flip through this gallery to see an early look at Kick-Ass: The Board Game:

Kick-Ass: The Board Game is based firmly around the comics, not the movies, and it leans heavily on the amazing art of its source. Panels from the comics are used on lots of cards, and the board representing New York City has a very cool hand-drawn look to it.

The Kick-Ass board game may be one of the best Kick-Ass games fans could ask for.

On top of that, publisher CMON told me that they want to represent every part of the Kick-Ass comics, not just the combat. Specifically, they’re not afraid to celebrate the mundane. So while there’s lots of fighting thugs, there are also times where you have to work at food shelters, do your chores, or just mill about. Being a superhero isn’t all glamorous, after all.

That said, glamour is certainly part of it. Every character, which includes Hit-Girl, Kick-Ass, Big Daddy, and more, has a handful of stats you have to manage. Happiness, fitness, health, and even social media followers are all tracked on your character card.

So when you do make a flashy play, you’ll be rewarded with fame. Get enough followers and you’ll unlock bonuses and perks for your character — and if you reach the top, you’ll unlock a super special ability card unique to your chosen character. 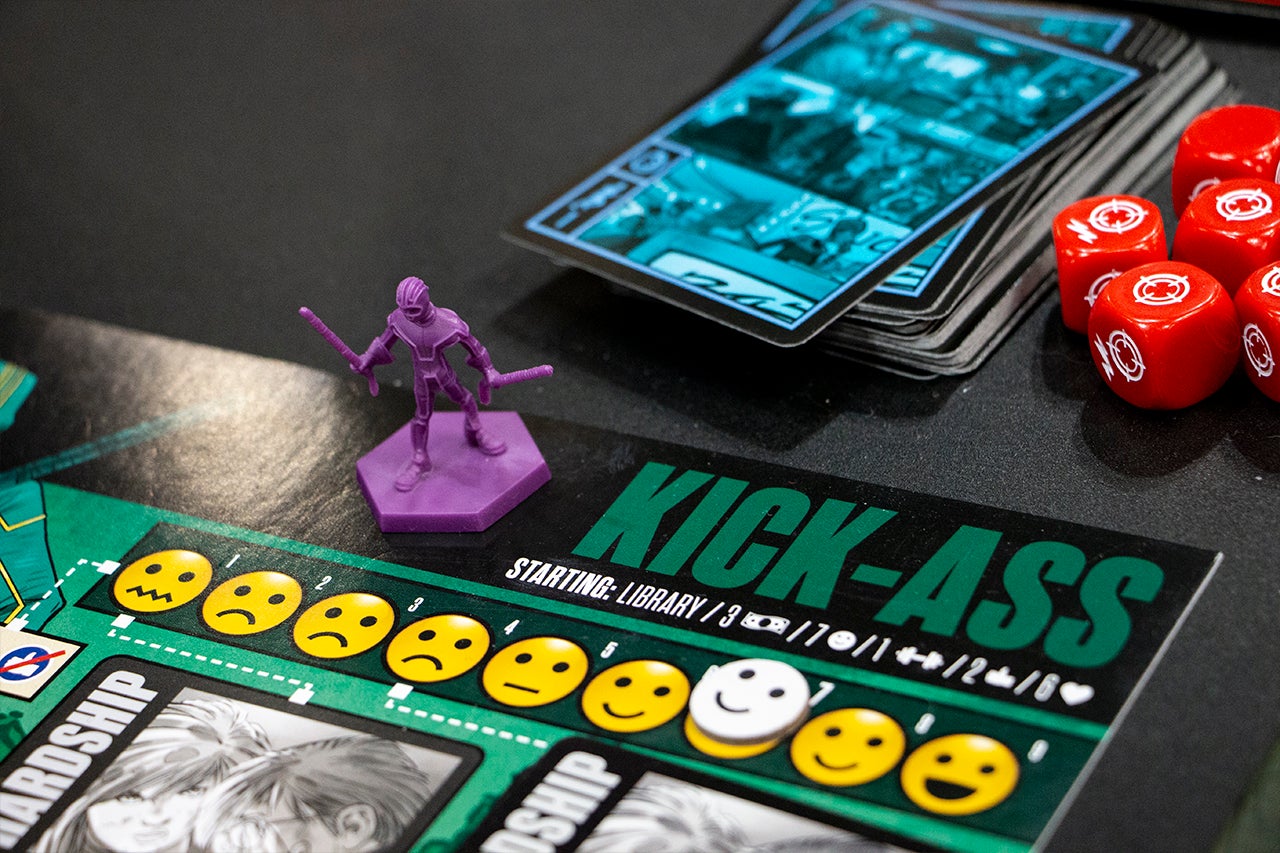 Play in Kick-Ass is split up into days, with each day consisting of three rounds. You have to work together with your fellow heroes to fight crime and solve problems in the city, without running out of money or getting too depressed (or killed) along the way. You take actions by picking cards from your hand of five, but at the end of each day, you can swap a card in your hand for a better one, so there’s a deck building aspect to Kick-Ass too.

It also comes with 45 minis, including Kick-Ass, Hit-Girl, and more, and they all feel like the comic characters hopped off the page and came to life. CMON isn’t known for its excellent board game minis for no reason. They produce quality stuff, like the amazing Rising Sun minis we unboxed early this year, and the results here speak loudly for themselves.

Chances are you’ll be seeing a lot of them on the board as well. More low-level thugs are added constantly, and it isn’t long before the city can get overrun. Your job is to stop that, and then eventually take down the big bad behind it all.

I enjoyed my demo of Kick-Ass: The Board Game at Gen Con 2018. It felt approachable enough, though there’s a whole lot of different things to track on any given character. But it seems like a solid entry in a rapidly-growing library of co-op board games — it has a solo-mode as well, which is always a perk.

It’s funny that Kick-Ass: The Board Game might be the best Kick-Ass game fans get, or at least the most dedicated to its true source, when there’s an actual action beat-em-up video game out there. But I guess recreating a comic with cardboard does have a bit of poetry to it.

Kick-Ass: The Board Game is currently available for pre-order for $60, and will be out at the end of this month. For more of our coverage from Gen Con 2018, check out IGN’s tabletop page, where you can see everything from the show and more.